The Delusion of Closure 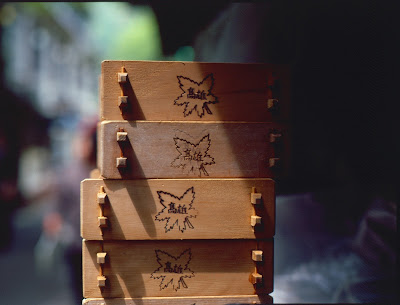 I have no background in psychology, whatsoever, but for decades I have bristled at the overuse of the word "closure." I have always been uncomfortable whenever the word is applied to anything less tangible than the clasp on a suitcase or the shuttering of a store.

As far as I know, "closure" -- as it refers to the... I am not really sure, the... "progress" that occurs or is  imposed out of a professional or societal "get over it" impatience with an emotional tumult or the subsequent grieving -- is a relatively modern term. I may, in my youth, have not been as attuned to discussions of emotional hardships and only came upon the term when it was bandied about in 1980's TV dramas. My point is, I don't know when it started and further to that, I am not sure how it is defined. Merriam-Webster says something about a "comforting or satisfying sense of finality."

This is where you lose me with this whole "closure" thing.

There are definitions of closure that are broader and more specific to psychology. As I have read on closure, albeit, ahem, from a Wikipedia post on the topic, there is a lot of emphasis on the quest for the clarity as opposed to ambiguity. It is hard to say if closure is a lasting, personal realization or not. My own assumption is that "closure" is more often a clinical, institutional or judicial concept than it is a personal one. Ambiguity, however, is not something that we can entirely set aside, nor is it necessarily something to be avoided or lanced. I can recall occasions where I, in the very midst of being victimized, pondered my guilt and calibrated the rage that was roiling within me. On other instances, retrospect has scrubbed away the ambiguity, but has left the more raw than they were when an incident occurred.

On a personal level, grief and distress are hard to regard as aspects of life that can be made final in a manner that brings satisfaction or comfort. Scars remain. They consequently impact the way you interact with people, respond to triggers that remind you of that pain. Asserting that there is finality, satisfaction or comfort in the face of grief may be more a matter of defining and limiting professional responsibility, whether it is in a clinical, legal, or ... responsibility than it is a manner of actually arriving at that rather magical realization of closure.

The term "closure" may be, at best, a naive term that ignores that messiness of emotions unleashed by trauma. At worst, it may be an insistence that an individual is henceforth on their own with their healing process. What we are learning is that traumas are not see neatly packaged away to be set aside in an attic to gather dust and be forgotten until there is a realization that this particular box of memories can be disposed of. Instead, like many things int he attic, it is there to be inevitably unpacked. Whether it manifests itself in a lingering pattern of behaviour in a victim or lies dormant like a regressive gene that emerges among later generations as the study of epigenetics is making a stronger case for, the trauma and consequent grief, guilt or shame linger. This may be still subject to debate or further research but it appears to be more thought out and sturdy in the face of scrutiny than closure.

Not only is "closure" a relatively modern term in terms of recent use, but within Leonard Koren's discussion of the modern or modernist in contrast to wabi sabi, it would also be considered modern. The presumption that closure can bring a comfort or satisfaction that is in any way permanent or final seems to be something decreed by a third party rather than the person experiencing that loss or trauma. Something along the lines of, "We have a conviction now. All better?" may be a lazy shorthand on my part in summing up the assertions of closure, but I may not be far off the mark. The characteristics of the modern, as delineated by Koren include the following: modularity, control, intolerance of ambiguity, unconsciousness and perhaps an element of the inert or the isolated.  These characteristics can all be linked to closure. Regarding our emotions, especially the most difficult ones to contend with in a manner that sets them aside with the intention of asserting control, maintaining appearances and moving forward with disregard for all that is within fosters an unhealthy detachment from experiences that define or refine who we are.

The experiences that we have or get handed down to us as part of our ancestry, whether in the shared spoken stories or the repressed secrets that crop up epigenetically go toward refining who we are as individuals. The complexity of our emotional lives cannot and be neatly packaged. Memories and regrets can well up at any moment. A therapy session should not be confined to a 50-minute, parametered discussion that does not digress or divert from an intended line of dialogue. Is closure merely a shorthand deployed to assert a mass-produced, normalized calm?  It seems to foster a less mindful way of engaging with current experiences and with your self.

Instead, our rough-hewn, hand-made personalities ought to be allowed to remain fraught with the mercurial doubts and pains that impose their presence regardless of when they deem it appropriate.  We should not be expected to package our pain and leave it behind until we decide to "Kondo" the clutter in our hearts and souls. We should be allowed to carry our pain, expose it to the light and ponder the cobwebs of agony or disappointment that may cloak hopes or dreams and accept that as a part of us that will remain throughout our journey. In acknowledging these aspects of our full selves we can come to some comfort in accepting that we walk through our lives with wounds and scars that can be seen and can be described, shared or narrated as well. In that, there is much more healing than suggested in fleeting half-lives of closure.  Beyond healing there is also an authenticity and a wholeness that closure, regardless of its purported benefits, would likely not accommodate.
counselling epigenetics grief Leonard Koren modernism psychology trauma Wabi Sabi 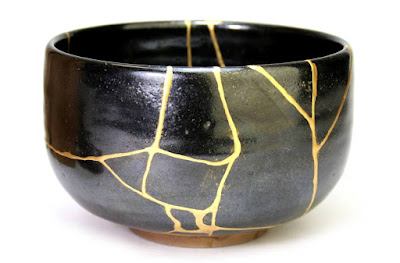